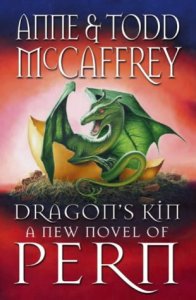 Dragon’s Kin is the first, but not the last, collaboration between Anne McCaffrey and her son, Todd McCaffrey.  I read a bit of an interview with Todd, wherein he basically said that he grew up surrounded by Anne’s Pern books, and was full of stories set in that world.  He went on to also write a few Pern books independently.  While no new Pern books have been published since Anne McCaffrey’s death in 2011 (Sky Dragons was published around the time of her death, having been written by Anne and Todd together), Todd McCaffrey’s website indicates that both he and his sister were left the rights to write about Pern in Anne’s will, and that his sister may be publishing a Pern book sometime soon (ish).  So while I am nearing the end of the Pern books, there is that delightful possibility of a new tale in the future!

Anyway!  I really enjoyed Dragon’s Kin, which took us to a different aspect of Pern – a mining camp as the second interval is drawing to a close.  With less than twenty years until thread falls again, the people of Pern are beginning to prepare.  In Natalon’s mining camp – which he hopes will eventually be approved as an official Hold – the men work hard to mine coal, which provides the needed fuel to forge metal tools used throughout Pern.

Our story focuses on Kindan, the youngest in a large family of sons (and one daughter, soon to be married and leaving the camp with her new husband).  Kindan’s father is the keeper of the camp’s watch-wher.  Related to dragons (and, of course, the ancestors of dragons, fire lizards), watch-whers are believed to be a genetic mistake.  Dragons where created from the genetic information of fire lizards by a skilled biologist named Kitti Ping.  In Dragonsdawn, we watched Kitti Ping create the dragons.  The prologue to Dragon’s Kin tells us –

In what was regarded as a mistake, Kitti Ping’s daughter, Wind Blossom, created smaller, overmuscled, ugly creatures with great photosensitive eyes.  Called watch-whers, they were useless fighting Thread in the daylight.  But the resourceful Pernese discovered that the watch-whers were ideal for seeing in dark places, like the caves that became the Holds for the Holders and mines for the miners.

The story of Dragon’s Kin focuses on watch-whers and their purpose.  It was a new and intriguing angle to Pern.  The authors crafted a story that lifts a formerly obscure aspect of Pern (I’ve always been a bit curious about the glossed-over watch-whers) and gives them an entirely new purpose and importance.

Kindan’s story is also interesting, as he struggles through tragic loss and tries to find his way.  We have a great villain who is just looking for personal gain rather than rebelling against change (THANK GOODNESS) and several other new and interesting characters.

All in all, Dragon’s Kin breathes some new life into the story of Pern, which was beginning to get a bit redundant.  A 4/5 read and an excellent addition to the series.