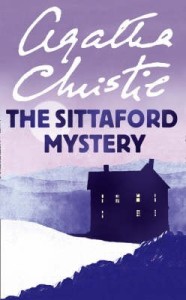 AKA The Murder at Hazelmoor (a much more sensible title since the murder takes place at Hazelmoor, not Sittaford, but whatever)

Our story opens during a snowstorm in Dartmoor, where the residents of the tiny village of Sittaford are gathering in “the big house” for an evening of quiet socialization.  The hostesses are Mrs. Willett and her daughter, Violet, who have rented Sittaford House for the winter.  The house’s actual owner, Captain Trevelyan, has moved the six-or-so miles down the hill to the larger village of Exhampton for the season.  However, he has retained a close friendship with his long-time cohort, Major Burnaby, who lives in one of the small cottages near Sittaford House.  It is the residents of some these little cottages who are gathering in Sittaford House this snowy evening – Major Burnaby, Mr. Rycroft (an elderly bachelor), Mr. Garfield (a young man staying with his elderly, bed-ridden aunt because she holds the purse-strings), and Mr. Duke (a man of middle-age and slightly mysterious background: possibly from trade, but the neighbors have decided that what they don’t know for sure won’t hurt them).

Throughout the course of the evening, the party decides to try a little table-turning, wherein those present sit around a small table and call for spirits to appear and give messages.  Most everyone knows it’s rather nonsense, but that’s part of the fun.  At first, the messages are lively and silly, but things take a more serious turn when the table tells everyone that Captain Trevelyan has been murdered.  It is 5:25.

Everyone is quite distressed by the message and the game breaks up. Major Burnaby determines that he must go to Exhampton to check on Trevelyan, and he will have to walk since the roads are impassable by car due to the deep snow.  Despite everyone’s protests, he bundles up and heads out.

Well, as you  might have guessed, Burnaby arrives to find Trevelyan dead, and the story goes from there.  Who killed him?  How did the message get through the “spirit world” to the guests of Sittaford House?

As the story progresses, the police make an arrest – one of Trevelyan’s nephews, who stands to inherit a great deal of money (and who definitely needs it).  From here, we get two major perspectives.  One, we follow Inspector Narracott, who is officially in charge of the investigation.  Secondly, we follow a news reporter, Charles Enderby, who joins forces with Emily Trefusis.  Emily happens to be the financee of the accused.  She is positive that he is innocent and is determined to clear his name.

The Sittaford Mystery  is pretty classic Christie.  There are some really likable characters and plenty of red herrings.  I really liked Narracot, Enderby, and Emily.  However, at times I felt like some of action was a little too coincidence-based.  Still, the story rolled right along and I enjoyed it thoroughly.  While not my favorite Christie, it was still a solid read.

5 thoughts on “The Sittaford Mystery // by Agatha Christie”