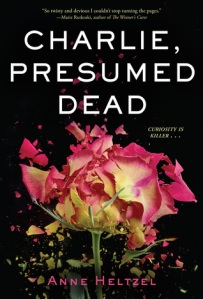 Do you ever do this awkward thing where you read someone’s review of a book and they really liked it, so you read the book and then you think it’s really terrible?  Well, that happened to me.  Even though Carol over at Reading, Writing and Riesling thought Charlie, Presumed Dead was an intriguing read, I would say that it is the worst book I’ve read so far this year.  But no hard feelings, right??  :-)  A difference of opinion is what keeps reading and reviewing engaging.

I finished this book the other morning, and was so enraged by the “conclusion” (yes, I put it in quotation marks because it was literally on the top five list of worst endings I’ve ever found) that I put these initial emotions on Goodreads:

I legit just finished the book and am so filled with aggravation that the urge to bash it on the internet is overwhelming.

This book was a 98% waste of time due to a complete lack of actual plot (apparently masterminding global coincidences from afar makes up for no story), stupid present-tense first-person voices that sound the same (broken up by an even worse present-tense SECOND-person voice, ugh), protagonists who make absolutely nonsensical decisions, the idea that two teenagers who are also strangers to each other could just start continent-hopping with no hesitations or issues, an evil villain who is also a teenager who also magically knows how to hack personal email accounts and skydive and fly a plane and hire an assassin and set up an elaborate treasure hunt to lure two unsuspecting females to their demise, random attempts to have serious conversations between two protagonists despite the fact that the conversations add nothing to the story and make no real sense, a long scene set in a gay prostitute/bar neighborhood because you have to have at least one gay and/or transgender character in every book now even if that means that you have to make them into a prostitute (because obviously it’s better to have a homosexual prostitute in your story than no homosexual at all), did I mention the coincidences? That the entire book was literally built on coincidences? Not just one – EVERY STEP OF THE WAY WAS BASED ON ANOTHER COINCIDENCE – and, finally, the absolutely worst ending to a book that I have EVER read – a complete and total, unapologetic cop-out that was unfulfilling, open-ended, vague, stupid, and just plain obnoxious.

The 2% that wasn’t a complete waste of time was made up of an intriguing premise and brief moments in which one protagonist or the other was likable. (Although even when they were likable, they didn’t stop being stupid.)

This was definitely the worst book I’ve read so far this year, and I wouldn’t touch another book by this author even if you paid me to.

More detailed review coming soon. This isn’t as much a review as a gag reflex. 0/5 stars.

So yes.  Basically, our story starts with Charlie’s funeral.  Although Charlie’s body wasn’t found, the plane he was flying (solo) wrecked and they found his blood-stained jacket, so they’ve just decided that obviously he’s dead.  Our first narrator, Aubrey, has flown to France (from the US) for the funeral.  Even though she had been dating Charlie for over a year, she had never met any of his family, and she feels awkward and out of place, especially when Lena (our second narrator) stands up to give a bit of a eulogy…  because she’s been dating Charlie for three years.

Aubrey and Lena get to chatting and conclude that Charlie was apparently not the guy either of them thought he was, especially since he acted like a completely different person with both of them.  Lena doesn’t believe that Charlie is actually dead.  Aubrey is desperate to get back a journal that Charlie stole (?), and so they decide to travel together to try and piece together what may or may not have been the last couple of weeks of Charlie’s life.

The actual premise of this story is really intriguing and pretty creepy.  The back story of how Charlie works his way into the lives of both girls is definitely a good weird-out.  I didn’t dislike either of the girls, although my respect for their intelligence was somewhere around the nil level.

The first thing that began to bother me is that these girls are like eighteen or nineteen, so I was weirded out by the fact that they were both in this super-serious relationship with a guy in a really unhealthy way.  Like, does no one’s parents pay attention to their kids any more…???  Also, both girls just sort of scamper all over Europe and beyond without a whole lot of trouble.  Aubrey’s worried about what her parents would say and she’s kind of lying to them about the whole thing, but Lena pretty much acts like this is normal life, just travel around, get trashed at clubs, chat it up with creepy strangers, get on a boat with a creeper and drink his tea even though earlier he acted like he wanted to kill you.

The writing was really fast-paced, and I will say that despite the fact that Aubrey and Lena were really dumb, I could hardly put this book down.  It was honestly the ending that killed this book for me.  If it had actually had a reasonable, solid, logical ending, I would have comfortably given this book three stars despite its overall ridiculousness, because it was super engaging and a wild ride.  But the ending was a complete and total cop-out that left me feeling so aggravated that my husband finally told me that it was just a book and I needed to let it go.  ;-)

The rest of this review will contain spoilers, so if you want to read the book (and there are plenty of positive reviews, so don’t let me harsh your vibe!), you will not want to read further, as the best part of this book is having no idea what is really happening with Charlie.