I like to preface my reviews of “classic” books with a reminder:  I’m not a literary expert.  I just know what I like. So don’t expect this crazy, insightful post about this book: it’s probably going to be just as deep as any other review of mine.  I don’t really know a lot about Charles Dickens. I just happen to know that I really, really like this book. 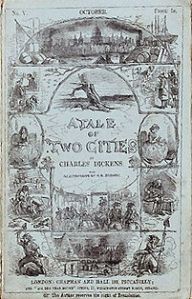 I hadn’t read A Tale of Two Cities since early high school, or maybe even junior high.  While I vaguely remembered thinking that it was a good book, many of the details escaped me.  Consequently, I was genuinely blown away by this story, which is way more readable than I remember it being (apparently my vocabulary/reading comprehension has improved in twenty-odd years, which is good), and just fantastic writing clear through.

Sure, Dickens tends to go off on these random descriptive paragraphs, and sometimes he takes the (very) long way around instead of just saying what he means, but on the whole this story is so strong that it would have taken some really bad writing to ruin it – and Dickens is a long, long way from bad writing.  Some of it, in fact, is so beautiful and so amazingly relevant almost 160 years after writing, that I would find myself stopping to reread a sentence several times over, just in an attempt to soak it in.

The story itself, of heroism and courage, of true love and sacrifice, of loyalty and betrayal – absolutely fantastic.  And if Lucie is a bit ridiculously blonde and fluffy, I still believe there is a strong core of intelligence and bravery in her, as she is willing to forego many comforts, and even to risk her life, to protect and care for those she loves.

I love Dickens’s humor throughout, which adds just the right amount of seasoning to what could otherwise be a rather sad tale.

When they took a young man into Tellson’s London house [a bank], they hid him somewhere till he was old.  They kept him in a dark place, like a cheese, until he had the full Tellson flavour and blue-mould upon him.  Then only was he permitted to be seen, spectacularly poring over large books, and casting his breeches and gaiters into the general weight of the establishment.

I have read some places that Dickens didn’t “appreciate” women, but I didn’t really get that from this story at all.  Like I said, Lucie can be a bit too angelic for my taste (and Dickens does love to describe an angelic young woman at length), but there is nothing weak about her.  And as for Madam Defarge – geezy cow, what a fabulous character!  Strong, intelligent, driven – a fantastic leader with a strong sense of justice.  Madam Defarge is terrifying and amazing.

Dickens obviously thinks that Englishmen are superior to the French (but I’ve yet to meet an Englishman who doesn’t think that so), but I think that on the whole he does a fairly decent job of portraying the reasons and stories behind the terrors of the French Revolution, while still not justifying them.  Dickens writes mob mentality pretty brilliantly.

In all honesty, this is one of those books that stirred me so deeply that I find myself pretty bad at writing a review for it.  But I will say that all novels should do what this one does: inspire, hearten, and challenge their readers.

And for all the haters out there (and I read reviews by several of them) – I’d like to see you do better.

PS If you would like to read a far more coherent and intelligent review, I highly recommend popping over to check out what FictionFan has to say about this classic!