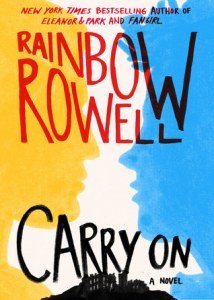 So I read Fangirl a while back, and it was pretty delightful.  I told my sister to read it, and she legit fell in love.  She read Fangirl twice – in a row – and so of course that’s what I got her for Christmas.  While I was at it, I figured I would go ahead and get her Carry On as well.  Of course,  being the great sister that I am, I told her that I got it for her, and then kept it so I could read it first.  ;-)

On the whole, I enjoyed Carry On just fine.  It was a pretty solid 3/5 for me.  A good one-time read, but not really a book I picture myself reading again.  I liked the world Rowell had created, and I quite liked Simon and Baz (although not as a couple).  The story clicked along at a decent pace, and I definitely wanted to see how everything came together.

The problem, I think, is that I was introduced to Carry On in the context of Fangirl.  In Fangirl, Simon Snow is set up as a Harry Potter-esq series of books.  So even though Carry On wasn’t really a lot like Harry Potter, I couldn’t stop drawing comparisons between them.  I think that if Rowell had written this book first, and then later written Fangirl, I may have enjoyed Carry On better.  Truthfully, it isn’t a whole lot like Harry Potter.  (Magical boarding school, yes, but there are plenty of magical boarding school books.  “Chosen One” concept, yes, but there are also plenty of books with a reluctant hero.)  The world of magic/nonmagic that Rowell creates is quite different from Harry Potter, but I couldn’t stop contrasting them, and, frankly, Carry On came up wanting in every comparison.

The main thing is, it felt like I was picking up the final book in a trilogy.  While we get references to various backstories, we don’t actually know the backstories.  So this whole years of Simon and Baz being enemies thing felt a little weak.  Sure, Simon and Baz tell us that they were enemies, but I don’t actually experience that in this book, because they are working together for the majority of the story.  There wasn’t a lot of emotional impact from these forever-enemies becoming cautious friends, because I basically only ever knew them when they were trying to be, if not friends, at least not enemies.

There were other things in the story that felt that same way: I just had to believe that all these things had happened in the past, and that now they were super different.  I don’t really know how to explain it, but it literally felt like I had started reading in the middle of a book instead of at the beginning, and I really didn’t feel a lot of strong emotions about the story because of that.

I was definitely not a fan of the multiple first-person narration, either.  It’s not a form I’m usually fond of anyway.  It’s too many voices and they didn’t sound different enough to make it work.  I also think that a third-person narration could have filled in some of those backstory gaps a lot better than random memories from random first-person narrating.  I especially find first person narrating a drag when there is romance because then I have to listen to this person blather on about their feelings, which I find incredibly boring, especially when I don’t really feel like the romance is remotely believable.

In general, I don’t really read a lot of LGBT romance anyway; not my thing.  In this particular instance, the romance between Simon and Baz felt completely unbelievable, not just because of them both being guys, but just because it was super random.  I don’t know, it just didn’t feel like that was the real story.  Them becoming friends, yes.  Lovers, no.  And possibly part of the reason I don’t read a lot of LGBT romance is because I get really tired of the internal “Oh my gosh, I think I might be gay!” monologue.  If you’re a dude and you’re enjoying kissing another dude, you’re probably gay.  I’m not sure why I have to listen to pages of you contemplating whether or not that’s a thing.  It’s pretty boring and it does absolutely nothing to actual move the story forward.

Like I said, I don’t have a lot of patience for first-person romance anyway.  I think I like him.  He’s so cute.  He fills me with butterflies.  Oh!  His kiss!  So perfect!  I daydream about his kiss for the next five hours even though I’m supposed to be doing something useful with my life that would actually make something happen in this story.  Did I mention the kiss?  He’s so cute.  Wow, the kiss.  I just can’t stop thinking about that kiss.  I should probably be figuring out how to rid the world of this evil menace except…  kiss!  My gosh, please stop.  Just please.  Stop.

The whole big plot with the Insidious Humdrum and Simon’s mentor, the Mage, is a bit disjointed.  We probably could have gotten better resolution and direction with that if we didn’t bother with romance, and that would have been great.  It kind of made sense, but also felt rather abrupt, which goes back to that whole I-felt-like-it-was-the-middle-of-a-book thing.

So, in short, if you always though Dumbledore was a jerk, and that Harry and Draco should start kissing, you’ll probably find a lot more to like in Carry On than I did.  For me, while a decent tale, it was a bit too disjointed and directionless to add to my permanent collection. However, I think that Rowell has a lot of potential for writing some fun and engaging fantasy if she starts at the beginning of the story instead of in the middle.

3 thoughts on “Carry On // by Rainbow Rowell”