The only nonfiction book that I loved so much that I actually wrote to the author to tell him that his writing really impacted my life…  and he wrote back!  Ha!  Originally posted on tumblr 27 August 2012. 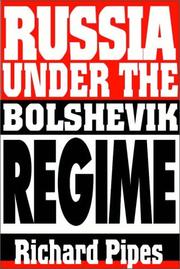 If you had told me three months ago that when I finally finished reading all 500+ pages of this book about the Bolshevik rise to power, I would actually be sad that it was over, I would not have believed you.  But, it’s true.  I really, really, really liked this book.  So much so that I found the author’s address so I can write him a letter, and I’m planning to actually purchase this book.  Seriously.

Where to even begin?  I read Mr. Pipes’s book The Three Whys of the Russian Revolution first; it was assigned reading for Tapestry.  I was really impressed by the author’s ability to write about complicated situations and theories with clarity. I am no expert on Russia or her history, yet Pipes kept my interest throughout the entire book.  More, he intrigued me and caused me to think about and reassess many of my views of Communism and Russia.

The book was brilliant all the way through.  The beginning is a little rough, as he is describing Russia’s civil war between the Reds and Whites.  There are a lot of names of people and places, and since they all look like Tzagoragphy, it gets a little complicated for English-speaking folks like myself.  But once I got through that bit, things settled out with the main players and places, and it was much easier to follow.

Pipes doesn’t really limit himself to just the history of what was happening in Russia.  My favorite chapter actually looks at the concept of totalitarianism: what it is and where it has existed in recent history.  Throughout the chapter, Pipes compares and contrasts the regimes in Russia, Germany, and Italy.  This is especially intriguing because Germany and Italy are always classified as fascist and put at one end of the political spectrum, while Russia is labeled communist and placed at the other.  Yet Pipes argues that these “governments” had far more in common than most people credit, and he argues the point very well.

In that chapter, too, Pipes talks a great deal simply about the steps to totalitarianism, and how Lenin, Hitler, and Mussolini all worked within and through their legal political systems to gain control.  Fear, Pipes tells us, is the totalitarian’s best friend.  Each of those three regimes chose a scapegoat (capitalists or Jews for example) and then built up fear of that group, until the population was willing to do whatever it took to protect themselves from this threat.  Except there wasn’t really a threat and there wasn’t really a need for protection–but that realization came too late; power had already been given up by the people.

So I don’t know, it was just a lot of food for thought, looking at our government and the many wolves to which they point.  Are the wolves real, or are they merely shadows being used as excuses to take more and more control of our lives?

Anyway, I couldn’t believe how easily this book read.  So many books of this weight are written specifically for people who are already neck-deep in studying the topic, and thus are almost impossible for a newbie to the situation to understand.  Example: I also checked out a book on Mussolini’s Italy.  I gave it up after the first four or five chapters.  The author assumed that I already understood exactly what was going on in Italy and who was in charge and why and how they got there.  Pipes, on the other hand, manages to explain the background thoroughly but not overly, making the rest of what he has to say meaningful, relevant, and interesting.

If you ever have to do any studying of Russia from the point of the Revolution to Lenin’s death, I strongly recommend this book.  If you don’t feel like reading all 512 pages, at least read chapter five, on totalitarianism, and the last chapter, which is a summary of the rest of the book.

This is one of the few non-fiction books that I’ve read lately that I see myself reading again in the future.