So this review is a bit behind, as we actually listened to most of this book back in July when we drove to Colorado and back.  Tom had never read All Creatures Great & Small, but it is a long-time favorite of mine, possibly one of the earliest pieces of British literature that I ever read.  Since then, I’ve realized that the vast majority of my favorite authors are British (Herriot, Agatha Christie, C.S. Lewis, P.G. Wodehouse…  the list goes on!), but I do believe that Herriot was the first.  I have so, so much love for his absolutely delightful books.  All Creatures and its sequel, All Things Bright & Beautiful, are probably my two favorites, as most of the stories in those two focus on the bachelor days of Skeldale House.

In case there is some outside chance that you have been completely deprived of the absolute joy that is James Herriot, a brief synopsis – Herriot’s books are loosely autobiographical (Herriot is actually a pen name for James Wight, and, as they say, the names have been changed to protect the innocent).  A newly licensed veterinarian (a word I still cannot spell), in 1930’s Britain, Herriot takes a position as an assistant in the Yorkshire Dales.  Jobs were hard to come by at the time, and it is with some trepidation that Herriot sets off for his interview.  In the end, however, he gets the position and finds himself engulfed in his new life as a true country vet.

Siegfried Farnon, his boss, isn’t much older than Herriot, and Siefried’s younger  brother, Tristan, is a little younger than Herriot.  The three of them work together at the practice (although Tristan is technically still in school).  Herriot’s stories are those of his everyday life, traveling about the practice, living with the Farnons (each a character in his own right), and eventually falling in love.

Somehow, Herriot manages to weave stories that are incredibly personable, bringing his clients to life.  Each chapter is usually a somewhat independent story, although as the book proceeds, many characters reappear.  Despite the fact that there are so many different people in his book, each one comes through as an individual, even if they only have a few lines or only appear for a paragraph or two.  You never know, at the beginning of a chapter, whether it’s one that will make you laugh or cry, but it is almost guaranteed to do one or the other (or both).

Herriot was a vet during a truly engaging period of time, when so much was changing in the industry, as antibiotics and other medicines are arriving on the scene, while at the same time, agriculture is transitioning from using horses and other draft animals to reliance on tractors and other mechanical devices.  Throughout the books, it is interesting to watch the practice as a whole take on much more small animal/pet work, as people’s attitudes (and finances) change from regarding animals as work/production value only to pets/companions as well.

These are people and tales that are a permanent part of my family’s vernacular, and I was excited to introduce Tom to them.  Christopher Timothy played the part of James Herriot in the 1970’s BBC television show.  While most book-to-movie/TV adaptations are somewhat (or a LOT) dreadful, I actually love this series and highly recommend it, in part because the casting of Herriot, Siegfried (Robert Hardy), and Tristan (Peter Davidson), is brilliant.  Timothy did a great job narrating the book, managing to pull off the various accents most of the time.  It was also nice to have a familiar voice telling the tales – in many ways, Christopher Timothy feels more like James Herriot than the real James Herriot!

One thing I really noticed was that I think I have read these books so often that I sometimes tend to skim over Herriot’s descriptions of the landscape or locations.  I couldn’t do that with the audio version, and I was struck afresh at how Herriot’s writing is actually quite beautiful.  He takes the time to paint a beautiful word picture, a genuine love of the Dales, the outdoors, and nature comes through strongly.  Herriot also has an obvious respect and love for the men and women who work this harsh and unforgiving (though beautiful) land.  It was a life of difficultly and, generally, poverty.  Herriot has nothing but respect and honor for these hardworking individuals.

I put off reviewing this book because I really hoped that we were actually going to finish it!  But we only got about 2/3 through before needing to return it.  However, Tom is finishing the story in the actual written form, so it all works out. 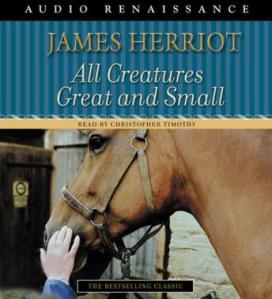 All Creatures is a book that I will frequently pull off the shelf and open at random to enjoy whatever story falls open.  Every one is a gem.  I hadn’t read the book straight through in several years, so it was really enjoyable to hear the story from the beginning.  Timothy’s narration was great, and Tom and I now refer to Waylon’s wild running about periods (Waylon is our border collie, for those of you who are new) as going “crackerdog”, thanks to Mrs. Pumphrey and Tricki-Woo.

My only reservation for the audio version is that each disc ends with music kicking on in the background. While this worked if the disc happened to be ending at the same time as a chapter, it felt really weird if we were in the middle of a story about someone’s horse dying and all of the sudden this happy music comes on in the background while Herriot is gravely informing someone of the animal’s imminent demise.  Simply saying “end of disc three” seems like it would have worked a little better!  Other than that, though, the audio version was really enjoyable, and I highly recommend getting a hold of Herriot’s stories in some form, be it print, audio, or even the TV series!