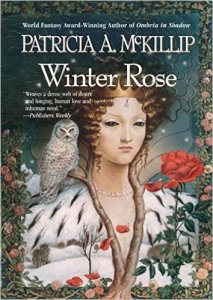 This is one of those books that mysterious made its way onto the TBR with no notes as to how this occurred.  Although I have never read Tam Lin, my understanding is that this is a retelling of that tale.  It is a fairy-tale-esq story about a young woman named Rois.  (Aside:  How does one pronounce ‘Rois’?  Is it French?  Spanish?  Portuguese?  The implication is that it means “rose,” but I was unable to figure this out, probably because I am not super clever.)  Rois lives with her older sister, Laurel, and their father.  They own a prosperous farm near a small village.  Despite the fact that Rois has always been rather wild, preferring to roam the nearby forest without any shoes over sitting about sewing and cooking (who wouldn’t?!), everyone in her life seems to accept her for who she is, and to love her.  Our story begins when a mysterious stranger moves into the closest holding to Rois’s.  Corbet is handsome and mysterious, returning to his family’s home – abandoned by his father on the night that Corbet’s grandfather was murdered (presumably by Corbet’s father).

This book is described (on the back cover) as a “lyrical book,” and McKillip definitely weaves together some beautiful language –

…[he] sat with us on the stone porch, as we always did, watching the day slowly bloom into night.  That’s how it always seemed to me: not the fading of a withered flower, but the opening of some dark, rich blossom, with unexpected hues and heady scents.

She lies like the moon lies, a different face every night, all but one of them false, and the one true face as barren and hard as stone. 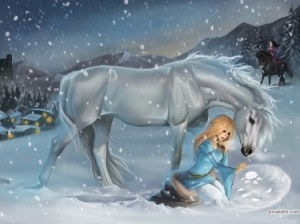 I’m kind of getting into trying to find fanart for the books I’m reviewing.

The story itself was engaging, but somewhat complicated, and I felt that the world-building was a bit weak, as it often is when stories take place here, but involve the concept of there being a parallel fairy world.  This book ended up being a pretty solid mid-ground read for me, as I really enjoyed the language and Rois’s voice, but found myself frequently having to flip back a few pages to reread and try to capture the thread of what was happening, as McKillip would use her flowery language to sort of gloss over what was actually happening, or even whether what was happening was actually happening, or if it was just a dream or vision.

The only big part of the story I had trouble believing was the love story between Corbet and Rois.  That aspect felt really underdeveloped to me, and so it sometimes made the actions of those two characters seem a little forced, as I wasn’t really convinced that they sincerely loved each other.

The witch/evil fairy part was also a bit complicated and hard to follow; her motivations also seemed super vague to me.

There is depth to this story that I liked.  Much of it was just incredibly beautiful and evocative, and there were glimpses of beautiful humanity that I just loved, but while this was a pleasant read, with language that was magical enough that I sometimes forgot that it the story didn’t really fit together all that well, it still landed as a 3/5.  There is a sequel, Solstice Wood, which is actually my next read, so we will see how that goes.

4 thoughts on “Winter Rose // by Patricia A. McKillip”