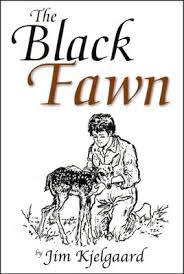 Continuing my read (/most rereads) of Kjelgaard’s works, I was intrigued to pick up The Black Fawn, which I had not read in several years.  (And by that, I mean probably 15?!  How am I old enough to have gone 15 years since reading a book that I last read in high school…!??!?!?)  As an aside, the copy that I have is the exact one that I checked out of the library those many years ago…  I am a huge fan of library booksales and snagging discards.  I love the old cloth-bound library editions, which they don’t seem to publish any more.  This one I picked up back in 2000 at a sale, complete with the library card that I signed back in the day…

Anyway.  This book is about Bud, a young orphan who is “farmed out” to an older couple in the countryside.  I realize that there were a lot of problems with the system that sent older orphans out to the country to help farmers, but in some ways I wonder if we shouldn’t revisit that system, where kids are sent someplace to learn the value of hard work and industry.  But lands on his feet, as Gramps and Gram are a wonderful couple who don’t really need help as much as a young person about the place now that their own pack of kids have grown and gone.

While most of Kjelgaard’s books are about boys who have grown up knowing woodlore, Bud knows nothing about country life, but he picks up quickly as Gramps is a fantastic role model, who loves his wife, his family, his farm, fishing, hunting, and all those other things that make up the stereotypical male of the 1950’s.  (Not that I’m bashing it.  I married a guy straight from the 1950’s stereotype and it’s brilliant; highly recommended.)

Anyway, during one of his first evenings on the farm, Bud comes across a newborn fawn who is an abnormally dark color, almost black.  Believing that the fawn has been orphaned and abandoned like himself, Bud stays with it until Gramps comes to find him, and reassures him that the fawn’s mother is close by and will still care for her baby.  Throughout the next several years, Bud continues to believe that his fate is linked with that of the black buck, who has grown into magnificent maturity.  Bud himself grows to love the farm, and wants to become a farmer himself when he grows up.

There were a lot of things about this story that I really liked.  There are a lot more feelings in this book than a lot of Kjelgaard’s books, which tend to be more action-oriented.  The love that creates a family between Gramps, Gram, and Bud is obvious, but Kjelgaard doesn’t pretend that it happens like magic.  Some of Bud’s early days at the farm are rough, and even after he has found his feet, he still struggles with feelings of inadequacy and worries that he is unwanted and that they will send him back.

I also appreciated the fact that, when Bud first goes to school and is belligerent and acting like a tough guy, his teacher actually clocks him.

All at once [Bud] found himself sitting on the floor.  Lights danced in his head.  He blinked owlishly, and as if from a great distance, he heard Mr. Harris say, “Get up, Allan.  Your seat is the third one in the first row.  Take it.”

After school, Mr. Harris takes Bud home and has a man-to-man talk with him:

“You needed that cuffing I gave you.”

Bud said nothing as Mr. Harris continued, “You had it coming and you know it.  I know exactly what you were thinking and why.  Stop thinking it.

“Let me tell you about another boy,” Mr. Harris said, “another orphan.  He was farmed out when he was just about your age, and he went to a new school exactly as you did.  Inside, he was frightened as a rabbit with five dogs and nine cats backing him into a corner, but he was afraid to let anyone else know that.  The teacher reprimanded him and he shouted at him.  Then, because he was convinced that only tough guys can get along, he hit the teacher with a chair.  The boy was twelve when it happened.  he was eighteen when he finally got out of reform school. …  It’s a true story, as I should know.  The boy’s name was Jeffrey Chandler Harris, who now teaches eighth grade at Haleyville Consolidated School.  I’ve wished many a time that that teacher had had sense enough to clobber me when I most needed it.”

Definitely a product of the times!  Do any of you think that there is any time when a teacher ought to be justified in “clobbering” a student….?? 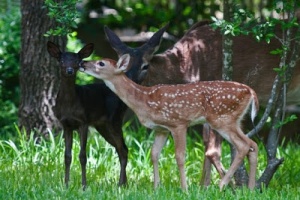 //another pic because gosh he’s cute//

At any rate, even though there were a lot of things about this story that I really enjoyed, it really felt like it could have been fleshed out a lot more.  The story covers about 4-5 years, and it seemed like there was a lot of character development that just sort of was skimmed over.  I would have liked a lot more to the story, but I suppose that this is technically a children’s book, so that may explain it.

Overall, though, I enjoyed this book a lot more than I remembered doing so the first the time (back in the distant mists of time) and would put this at a 4/5.  Kjelgaard does a really excellent job of weaving Bud’s life together with the black fawn’s without making it ridiculous or unnatural.  Bud, Gramps, and Gram are all very likable, yet realistic, characters, and while I would have liked to see more about their development, it was probably about the right amount for a 6th-8th grade level, which is the intended audience for the story.  As always, Kjelgaard emphasizes the importance of traits like diligence, honesty, industry, respect, and independence, and does it (for the most part) in a way that feels natural.  Another solid read for any young people in your life who love animals and the outdoors.

3 thoughts on “The Black Fawn // by Jim Kjelgaard”