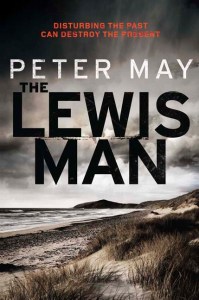 Okay, I was UBER EXCITED to read the second book in this series.  The Blackhouse was a 100% win for me, my favorite read of February, and a book I added to my always-growing list of books I would like to actually own and add to my personal collection.  In case you don’t remember, it’s all FictionFan’s fault that I’m reading these books; here is the link to her review of The Lewis Man…  she’s always significantly better at writing coherent reviews!!  Mine seem to involve a lot of asdf;lkawer;l!!!!!!!!!!!!!

Overall, I absolutely loved The Lewis Man. The narration was brilliant; the story-from-the-past narrated by Marsaili’s father is absolutely gut-wrenchingly beautiful; and the story itself is so engaging that I could barely put this book down.  It was another easy 5/5, and so exciting to read a sequel that was every bit as enjoyable as its predecessor.

Our hero from The Blackhouse, Fin, has left his job and returned to his childhood home on Lewis.  Meanwhile, a body is found, perfectly preserved, in the peat bog.  The DNA test indicates that the murdered man is a close relative to Marsaili’s father…  except he doesn’t have any close relatives.  As Fin helps Marsaili search for the truth, May gives us access to Marsaili’s father’s thoughts.  Stricken with dementia, his narrative is at times garbled, especially when he is trying to understand the present.  But, as is the way with such disease, his memories of the past are hauntingly clear.

What if everything you thought you knew about your parents wasn’t true?  It’s really just a brilliantly simple idea, and May plays it perfectly.  As the reader, I actually knew much more about the murdered man and Marsaili’s father’s past than Fin or Marsaili did, but that does nothing to ease the tension and intensity of the book.

May also delves into the way we, as a society, tend to shrug off the elderly and their concerns, and he handles it exceptionally well.

“We walk into that nursing home, and all we see are a lot of old people sitting around.  Vacant eyes, sad smiles.  And we just dismiss them as…well, old.  Spent, hardly worth bothering about.  And yet behind those eyes every one of them has had a life, a story they could tell you.  Of pain, love, hope, despair.  All the things we feel, too. Getting old doesn’t make them any less valid, or any less real.  And it’ll be us one day.  Sitting there watching the young ones dismiss us as…well, old.”

I loved the way how, throughout this story, May really brought home the reminder that everyone we know, everyone we think we know, has a story.  Something inside of them that no one else knows about.  A secret that they keep safe, something deep and important and hidden.  We naturally judge people by what we see/understand of them, but how often do we even consider all the layers below what they’ve chosen to share?

And he realized that you can never tell, even when you think you know someone well, what they might have been through in their lives.

Another thing about May’s writing that I really appreciate is that even though the stories are grim and intense, there is still a spark of humor throughout.  It really keeps his characters feeling very human and real, the fact that they can laugh and tease a bit.  It’s an excellent balance to could otherwise come off as quite bleak.

So I may have used this example before, but I worked on a dairy farm for years, and every year the milk inspector would come and check the parlor and the equipment and give the farm a grade, which determines what the milk can be sold for.  And there is this saying among the dairy farmers that you can never get a perfect grade – the better and cleaner your farm is, the pickier the inspector gets.  This, I find, applies to a lot of life, and books are one of those areas – the better the book, the pickier I get.  :-D  So yes, below are some rather nit-picky issues I had with this read.

When I read The Blackhouse, I griped a bit about the portrayal of religion/Christianity in the story as being a grim, hypocritical, self-righteous lot, while all the “good” and likable people were, of course, the people who had shaken free of those terrible chains of religion.  FictionFan (who is from Scotland and probably knows more about the religion there than I do :-D) had some good thoughts in the comment section of The Blackhouse, reminding me that religion has developed differently and different regions of the world, and that the Scots’ version does, in fact, tend to be a bit more on the grimmer side than in other places.  And while I understand and agree, it still frustrates me that the development of Donald Murray’s character is that basically he has to not believe in God in order to become a decent person.

And Fin realized that Donna knew only the bible-thumping, God-fearing, self-righteous bully that Donald had become.  She had no idea of the real man who hid behind the religious shell he had grown to conceal his vulnerability.

I just…  yes, I understand what he’s saying, but I really just can’t get behind this concept that the only way someone can become a kind and thoughtful person is if they ditch God.  I guess that I just wish it was a bit more obvious that what Donald needs to ditch is his understanding of God, because that understanding is wrong, not God Himself, if that makes sense.

Anyway, another minor problem I had with this book was Marsaili’s mother.  Just, I don’t know.  She’s been married to this guy for a really, really long time, and “Oh he has dementia so I want him out of the house right now and I’m throwing away all his stuff and I’m going to pretend like not just that he’s dead but like he never existed.”  It felt weird to me.  Unnatural.  It was probably the only point in the book where I found myself going, “Wait, what?  That does not seem like what this character would do.  At all.”  I can see where May was going with it, and how he wanted to be able to tie Marsaili’s father to his past in the end, but still.  It really turned Marsaili’s mother into a rather dreadful, selfish person.  I think her desire to have her husband not live with her any more could have been handled in a way that wasn’t so harsh, especially since in the first book Marsaili’s mother is portrayed as such a kind and loving person.  It wasn’t the fact that she felt like his dementia was too much for her to handle and that she needed him to stay somewhere else that felt strange, it was the fact that it had to happen TODAY like I HAVE PUT HIM IN HIS COAT and then just a couple days later she already has his stuff completely boxed up and ready to go out with the trash??  Without even asking Marsaili if she wants any of it??  I don’t know, it just seemed unnecessarily harsh for an otherwise gentle character.

Third and final personal dislike – this story was all about the past.  Like, a decently distant past.  Thus, the tie-in to the present-day danger felt a bit contrived and quite a lot rushed at the end.  It was plausible, but not likely in my mind.  Still, May manages to pull it off, and guess who stayed up late to finish the last several chapters?!??!  (Who needs sleep??  Not like I can sleep with all those loose ends hanging over me anyway!)

Overall, though, The Lewis Man was brilliant and gripping writing.  I came away loving pretty much all of the characters even more than I loved them in the first book.  May has created a community of characters who are, despite their many flaws, still striving to be good, decent, hardworking people – people you root for, people you want to see win in life.

5/5 and highly recommended…  getting read to start The Chessmen next and I can hardly wait!!

4 thoughts on “The Lewis Man”