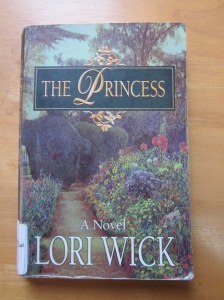 Gah, I am SO BEHIND ON BOOK REVIEWS.  The tragic part is that I don’t even review every book I read – somehow, no matter how busy life gets, it never gets to busy to actually read (yet the TBR list grows incessantly nonetheless), even when I’m too lazy to write about them.  Ah well.  After last night’s post, I realized that I actually had even more books that I’d teased you with!  Ridiculous!

But the hubby’s working late tonight, so I’m reverting to my bachelorette days by hanging out on the computer in my pajamas, eating canned ravioli, and pretending that I’m somehow being productive.  :-D

Okay, so The Princess.

Sometimes I get in a mood where I just want to read a fluffy, happy, romantic little story.  The Princess is a classic feel-good read for me, and one of my few “favorites” that I don’t actually own (I really need to remedy that!).  Set in a small, imaginary, European country (think Genovia from Princess Diaries) named Pendaran, this is the story of Prince Nikolai, who doesn’t want to get married.

In the Land of Pendaran, Shelby Parker lives a humble but good life. Her special qualities are eventually noticed by the king and queen of the House of Markham, who seek a new wife for their widowed son, Prince Nikolai.To uphold the tradition of their country, Shelby and Nikolai agree to an arranged marriage. But while Nikolai is a perfect gentleman in public, he remains distant at home, leaving Shelby to wonder what is in his heart. Will the prince ever love her as he did his first wife? Can the faith they share overcome the barriers between them?  (via Goodreads)

So I’m a huge sucker for books where people fall in love after they get married.  I’m not sure why that’s the ultimate romantic for me, but it is.  I think it’s because there’s no tension there, no wondering whether they’ve gone too far – every step forward is a good step.  I love the reminder of how marriage is commitment, even when love/feelings ebb and flow.

Shelby is really great character.  She’s not perfect by any means, but she is someone who has really embraced the season of singleness in her life.  Part of the reason that the king and queen are drawn to her as a bride for their son (who has asked them to find him a suitable bride as he is still struggling with emotions from the death of his first wife, even though she’s been dead several years) is because Shelby is living life.  She’s doing work that she finds fulfilling, she is volunteering and serving those around her, she spends time with her family, and she just in general is industrious, intelligent, and thoughtful.

Nikolai is nice hero, too.  He’s the dark, brooding type, but with good reason.  While he isn’t thrilled with remarrying, he accepts it as part of his role, and begins to work at knowing, and eventually loving, his wife.

This is definitely an unapologetically Christian book, but it really works with this story.  Shelby and Nikolai agree to marry in part because they believe that it is God’s will for their lives, and their faith helps them to overcome many of the obstacles in their relationship.  Wick does a good job of weaving faith throughout this story.  While it may be a bit much for those who don’t embrace the tenants of Christianity, I think that the overall story is strong, and that the faith part flows naturally, instead of feeling as though it’s been stuffed in as an afterthought as in so much Christian fiction these days.

One of the things that I really love about this story is that it’s set in modern times (well, in the 90’s, anyway) – so fun to read a princess story with cars and telephones!  Pendaran still retains a sort of old-fashioned feel – sort of Mayberry-esq.

It’s a love story, and it’s a beautiful one, and definitely a favorite that I highly recommend if you’re looking for something completely relaxing and very likely to spawn “Awwwwwws” throughout.  ;-)

5 thoughts on “The Princess”