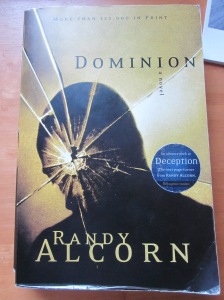 Dominion is a loose sequel to Deadline, in that it shares several of the same characters.  In Deadline, the main protagonist was journalist/columnist Jake; in Dominion we follow the story of his friend and coworker, Clarence Abernathy.  Clarence is an African American, and the main topic of this book is race, a subject that (I felt) Alcorn handles deftly.

If you’ll remember, my main complaint about Deadline was that it was all over the place.  Alcorn seemed to be using his novel as an attempt to touch on every single sensitive, controversial social topic around.  Thankfully, his focus is much better in Dominion, leading to a stronger story, and a more palatable message.  The mystery/thriller aspect of this story was also much better than Deadline’s, again, I think, because Alcorn was more focused.

Clarence is a successful, comfortable, middle-aged man, with a wife and children, living in the suburbs of Portland.  He’s worked hard throughout his life, and dreams of doing even better – and of some day leaving the city behind entirely and moving to the country.  His sister still lives in a poorer section of town, and Clarence is constantly trying to get her to move.  She insists that she loves her neighborhood and the sense of community, despite the crime and gangs in the area.  When Clarence’s sister and her daughter are murdered during a drive-by shooting, Clarence is determined that this apparent gang-crime isn’t just going to end up in an “Unsolved” file.  Teaming up with Jake’s detective friend, Ollie, Clarence begins to try to find justice for his family.

I’m going to start by saying that Alcorn is white.  So you can look at his story one of two ways: you can look at it and say, “Wow, this white dude doesn’t know what it’s really like to be black, so I don’t care what he has to say,” or you can say, “Wow, here’s a white dude at least trying to understand what’s going on, so let’s listen to what he’s got going on.”  Race is a topic of great sensitivity, and I’m not going to presume to judge  his writing as a black person would be able to.  But from  my middle-class white-girl perspective, I think that Alcorn did a decent job of challenging his readers to not just blow off the topic of race, but to be willing to reach out and work together towards healing and progress.

In Deadline, Jake became a Christian and began to study what that meant.  In Dominion, Clarence has been a Christian for years, but, with the brutal death of his sister and niece, he is struggling through a crisis of faith.  When circumstances force him and his family to move into his sister’s old house, right in the middle of the neighborhood he spent most of his life trying to escape, Clarence has to face many of the demons he kept successfully at bay.  Through conversations with Jake, who genuinely wants to understand what Clarence’s race struggles are, and with Ollie, who’s a fantastically honest and hilarious character (and, thankfully, the main protagonist of the third and final book of the series – Ollie is by far and away my favorite!), we’re able to start to understand Clarence’s difficulties. For instance, he talks a lot about how, because he has become a successful professional, he sometimes feels distanced and judged by his family.  During a conversation with Jake he says:

“It’s darned if you do, darned if you don’t.  I hear the pleas to ‘give back’ to my community.  By living in the suburbs I’ve supposedly lost touch with my people and my cultural roots.  Right.  Like all blacks are supposed to live in constant danger in drug-infested, crime-infested neighborhoods, and both whites and blacks resent it when they don’t.  Any white person who lives in poverty and a crime area, when he earns enough money, what does he do?”

“Usually he moves out,” Jake said.

“Obviously, and that’s perfectly fine with most people.  But when I moved out, it was like a betrayal, like I wasn’t being black.  Hey, I was just being human.  I want my kids to grow up safe and have a good education.  What’s wrong with that?”

I think that Alcorn also does an admirable job of balancing Clarence’s legitimate issues with his perceived ones.  For instance, a couple from somewhere in Asia (I feel so racist not remembering where!  I believe it was Vietnam) opened a convenience store in his neighborhood, and Clarence is offended by the way that they never hand him his change – they set it on the counter and let him pick it up.  Later, he finds out that this is a cultural thing for them, and they do it as a sign of respect for their customers no matter their race; he was over sensitized because he was expecting an insult.  However, at another point, Clarence points out to Jake that the girl who works the counter at one of their favorite cafes treats the two men completely differently – while bright and perky with everyone else, she’s subdued and avoids eye contact with Clarence.

At one point in the book there is a brilliant conversation that I somehow failed to mark.  But basically Jake tells Clarence that he really appreciates the sharing that Clarence has been doing, because Jake has never really realized that race was still such a big issue.  He tells Clarence that he’s never really thought about it before.  Clarence responds by saying that he thinks about it all the time.  Jake says that maybe if people like himself thought about race a little more, than people like Clarence wouldn’t have think about it all the time.  That’s really the conclusion Alcorn draws on the whole topic.  The road to healing on this incredibly divisive and emotional issue is for whites to think about race a little more so non-whites can think about it a little less.

The rest of the story is actually really good, too.  Like I said, the “thriller” part of the story works a lot better in this book than it did in Deadline, and consequently the book doesn’t bog down nearly as much as the previous novel.  I will say that this book was published in 1996, and Deadline was published in 1994, and even though it gives me a pang to say it, these books do feel a little dated.  (I mean Deadline is all about a newspaper – how 90s is that?)  There are several conversations in this book about the O.J. Simpson trial, which was hot news at the time, but I had to actually do a bit of reading to refresh the story in my mind (since I was like 12 at the time).  I kept finding myself wondering what Clarence’s opinion would be about the whole Trayvon Martin scenario instead.

Overall, while I would say Deadline was a 3, Dominion is a comfortable 4, and definitely quite readable on its own.  While you may understand more of the  back story for Jake by reading Deadline first, each novel reads strongly as an individual.