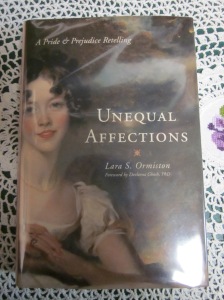 As I’ve confessed in the past, I really enjoy Pride and Prejudice retellings, most of which I don’t review because I’m embarrassed to admit that I’ve read them, as the vast majority are really just dreadful.  Even so, I find myself endlessly fascinated by the many, many divergent paths those retellings can take, perhaps because it reminds me how one very small decision and impact a whole string of events.

The best part about Unequal Affections, which is actually a lovely book, and one that I’m going to end up recommending instead of hiding, is the introduction, wherein someone (I’ve had to return this book to the library as someone else had it on reserve; I finished this book in early March, so I’m sorry if I sometimes get a bit vague on the details!), not the author, basically explains how the majority of P&P stories are ridiculous because they have the characters scampering about stealing kisses (and more), and that’s all just truly not what would have happened.  In short, though she didn’t say it in so many words, the introductioner says Don’t expect shagging.  How singularly refreshing!

Unequal Affections starts (more or less) with Darcy’s proposal at Hunsford.  But in this version, instead of losing her temper and telling Darcy just what she thinks of him, Elizabeth listens to his proposal and asks for time to think about it before giving her decision.  This alone is enough to get Darcy thinking, as well.  Elizabeth eventually accepts him, and Darcy returns to Netherfield to be with her as they plan their wedding – and get to know each other better.

I think that the reason I enjoyed this version so much is that one thing that’s always made me a bit sad about the original is that this huge gulf of misunderstanding had to be overcome by Darcy and Elizabeth separately, as Elizabeth reads and digests Darcy’s letter, and Darcy relives and digests Elizabeth’s accusations at Hunsford.  In this story, Elizabeth freely confesses to Darcy before accepting his proposal that she does not love him, and through the course of their engagement, they end up working through what were the contents of the letter/proposal refusal in the original, together as they arise.

Darcy is very well-written, as a gentleman in love, but still a gentleman, and, honestly, still just a man who is often completely confused by Elizabeth because she is, after all, a woman.  Most of the original characters stay true to form, and the story flows just as naturally as the original.

Unequal Affections is a rare gem in a plethora of Pride and Prejudice retellings, one that is actually a worthwhile read, that involves story and dialogue rather than heated looks and stolen touches.  A lovely love story, but more importantly, a good story, I definitely recommend it.