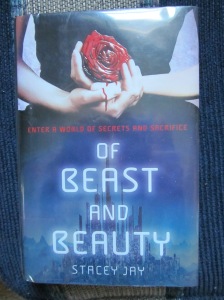 So a while back I stumbled upon a list of Beauty & the Beast retellings.  It’s one of my favorite fairy tales, and I’m always up for a good shake-up of the story.  I love seeing how the core elements of the story can be recycled into something completely new.

Of Beast & Beauty takes place on a different planet, and there’s a mild sci-fi feel to the whole tale, but even someone who is not usually huge sci-fi fan (me!) can still find this an enjoyable book.  I honestly had low expectations going in, as many modern YA books have left me feeling completely confused and depressed, but Of Beast & Beauty was actually an intriguing and enjoyable read.

I was leery at first.  If there’s one thing I hate, it’s this recent spate of first-person present-tense narratives.  ARGH!  They drive me CRAZY.  It’s such an awkward, stilted way to tell a story, and it generally involves a ridiculous amount of introspection (I wonder if he is here on purpose, or if mere coincidence has brought him to this place at this hour.  Does he realize that I cherish every hair on his head, and yearn for him to take me in his arms?  Does he realize that I’ve eaten onions for lunch?  I silently curse the onions as he draws closer.  He stops and looks at me, and I can feel his gaze burning through me, but all I can think about are the onions.)  Just.  No.  Why.  Please.  Stop.  Honestly, seeing the FPPT narrative appear in a book is often enough to make me not read past the first page.

But something about Of Beast & Beauty grabbed me anyway, and kept me reading past that first page, despite the FPPT.  For once, and I say that without exaggeration because I can’t think of a single other book that made this work, I actually enjoyed the first-person present-tense narrative.  In part, I think it worked because the narrative rotated between three different characters, each with a distinct voice, which allowed the story to progress even when nothing was happening to one character.  Part of the reason that first-person narrative is so limiting when it’s combined with present tense is that the narrator can literally only tell us what is happening to herself right then, at that very second.  By allowing the narrative to move around, Jay enabled the story to continue moving, even when one character was just hanging around in a jail cell or a tower – something is always happening to move the story along, and Jay was able to effectively shift the narrative to follow the story.

Something about the language in this book I loved – I can’t really explain it.  It was almost a poetic book, even though it wasn’t.  The epilogue, for instance, was beautiful in its entirety, but I especially loved this (mild spoiler, but really, you ought to be able to figure out whose going to end up winning) –

On the night their souls slipped away … the Summer Star split down the middle, leaving two stars in its place.

One was as white and pale as Queen Isra’s skin when she was a girl, the other a luminous orange like King Gem’s scales when he sat before a fire.  They were celebrated and named Beauty and Beast, but none of the king or queen’s people would ever say which star was which.  They would only look kindly on the stranger who asked and say, “Beauty is wherever you find it, and Beast is there when you need to defend it.”

This was a  book that wrestled with the ideas of beauty and prejudice and sacrifice, and did it well.  I really enjoyed the way that both the protagonists were equally prejudiced against each other in the beginning (which was really emphasized with the dual narrative) – watching them learn to trust was a good story.

For me, the weak part was the sort of evil goddess/witch/person/spirit – I use so many nouns because we don’t really know what she/it was or what really happened to her/it…  everything got kinda vague at the end and Yay!  Happy ending!  Epilogue! – there was some resolution with the characters, but not really with that aspect.

Also, someone dies in the end and I found it completely unnecessary and annoying because it felt more like Jay just didn’t really know what to do with him, so she killed him off instead of figuring out how he would be able to fit into the new order of things.  I personally felt like this character would have been a real asset in the future of the world, and that killing him was just lazy writing, but that’s just me.

Overall, this book was a solid and surprising 4/5.  An intriguing blend of fairy tale, sci-fi, and YA, this book was enjoyable when I wasn’t really expecting it to be, and the first time I’ve ever thoroughly embraced the dreaded first-person present-tense narrative style.