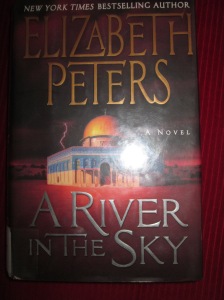 Sometimes an author writes a series, but doesn’t publish the books in chronological order.  This actually drives me crazy, because then if you want to read the series, it’s incredibly difficult to find a list (or rather, find consistent lists) because some people list them chronologically, some list them in published order, and some list them completely haphazardly.

I am a bit of a ditherer when it comes to deciding which way is the best way to read these series, because with series I love, I’ve had different experiences.  For instance, if I’m introducing someone to the Chronicles of Narnia, I always recommend that they start with The Lion, the Witch, and the Wardrobe rather than The Magician’s Nephew (even though the latter is first chronologically) because I feel like The Magician’s Nephew actually makes more sense if you’ve read The LWW first.

Peters, from what I can gather, wrote her initial Amelia Peabody series, and then reached a point where she decided that the characters’ stories had been concluded satisfactorily.  Instead, the next two books she wrote fit into “gaps” from the original books.  For the first run-through, The Ape Who Guards the Balance takes place during the 1906-07 season, and the next book that was published, The Falcon at the Portal, takes place 1911-12.  The two books above were published after the last book chronologically, but are set in the gap, taking place 1907-08 and 1910 respectively.  Peters passed away before published any further books, but talked of filling in the gaps even more with future books (although the only other huge gap is between the first book – 1884-85 – and the second – 1892-93).

ANYWAY all that to say (sorry for the yawn-fest) that, in the end, I decided to go with the chronological order on these read.  Guardian of the Horizon and A River in the Sky fit in so neatly that if I hadn’t known they were published out of order, I never would have suspected.

In these two books, Peters once again engages us with what have become her two main narrative methods – Amelia’s journals and “Manuscript H,” Ramses third-person narrative.  In these books I felt that Peters had done a much better job balancing these two voices, allowing them to work together rather than against each other, and underscoring rather than undermining the love that Amelia and Ramses share.

I will say that in Guardian of the Horizon, Ramses sleeps with a girl he has met (not graphically, but it was still like, Whoa wait what?!) so that was a little bit surprising.  While Peters has always tongue-in-cheek enjoyed hinting at the very intimate and warm relationship that Amelia and Emerson share, it’s not offensive because that sexual tension is balanced with a warm, committed, strong marriage over all.  That comes off very differently from Ramses’ night with this girl.

The anti-religion (especially Christianity) bias came through stronger in these books as well.  In Guardian of the Horizon the Emersons are traveling by boat.  Two of their fellow-passengers ::just happen to be:: a rather fanatical “Christian” missionary and his sister.  Per usual, the missionary is portrayed as stupid, stubborn, prejudiced, hypocritical in the extreme, anti-women, anti-minorities, and just plain obnoxious.  His sister is little better – fluttering, ridiculously submissive, simpering, dumb, unable to think independently, completely bamboozled, and just ridiculous all around.  What made me so angry about this pair is that they were completely unnecessary to the plot.  They were just filler characters, killing time, who could easily have been written as being either less obnoxious or not as missionaries.  While I don’t expect writers to always portray Christians as honest, upstanding, delightful people (because I am fully aware that many people who claim the Christian label do not act that way), it does begin to wear when an writer seems incapable of portraying any Christian as anything other than a stupid, greedy hypocrite, and, in fact, consistently goes out of her way to do so.

In A River in the Sky, Peters decides towards the beginning that she will get the Emersons to Jerusalem by having them follow someone who claims to be seeking the Ark of the Covenant.  However, the Ark doesn’t appear in the story at all, does not actually appear to be being sought, and the whole thing comes off as just being a way to justify Emerson’s claims that the entire Old Testament is historically inaccurate, full of lies, completely useless, etc., which he rants about AT LENGTH.  Again, I’m not against fictional writing using Biblical artifacts (hey, I love Raiders of the Lost Ark and all the King Arthur stories about seeking the Holy Grail, too – heck, Monty Python and the Holy Grail is a favorite of mine, and it doesn’t get much more sacrilegious than that!), but I don’t appreciate having an author introduce those elements simply because she feels like mocking the religion behind them.  It’s unnecessary, insulting, and degrading.

Other than those nagging annoyances, these books read very well.  (Sorry for all the complaining!)  I actually am really, really enjoying these books.  The mysteries are great fun, the main characters are quite likable, both Amelia and Ramses have an excellent narrative style, and most of the secondary characters are entertaining as well.  These two stories were a bit odd because neither of them took place in Egypt – in the first, the Emersons have to return to the “Lost City” from where they rescued Nefret in The Last Camel Died at Noon.  It was actually very interesting to return and see some of stories wrapped up a bit better, and to give Nefret some closure from her highly unusual childhood.

In the second book, as I mentioned, the Emersons travel to Jerusalem.  Besides managing to point out that every single major religion in the world is a joke, the story flowed fairly well.

The next book will put us back on track with publishing dates, and we’ll pick up the Emersons for the 1911 season.  The romantic relationship between Ramses and Nefret (or lack thereof – thus far, Ramses’ love is unrequited) has been paced slowly but interestingly throughout the stories and hopefully will pick up a bit soon.

Overall, these are fun and entertaining mysteries that I definitely recommend.