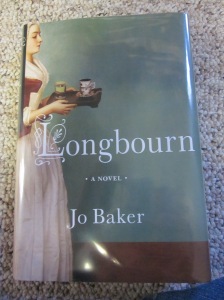 So this is a story about the servants at Elizabeth Bennett’s home of Longbourn.  There’s the housekeeper, Mrs. Hill, and her husband who works as the groom/butler/whathaveyou, and two girls, Sarah and Polly.  While the Bennett girls may have complained about their lack of money and entertainment, those who live belowstairs understand what it truly is to be poor and to work wretchedly long hours.  This book isn’t really a retelling of Pride and Prejudice because the main story has nothing to do with Elizabeth or her sisters; they are the background characters in this tale.

First, the pros:  I think that Baker did a good job of not destroying Austen’s characters.  Instead, the characters we tend to like from the original (like Elizabeth and Jane) are only more likable in this story, as they (unsurprisingly) treat their servants with kindness and respect.  Baker even goes a step further – some of the characters who are rather unlikable in most versions of the story (like Mrs. Bennett and Mr. Collins) are portrayed as people deserving more of sympathy than censure.  I have never felt more in charity with Mrs. Bennett as I did in this story.  She was just as annoying, but somehow more human.

But the cons – First off, Baker never tells us how old Sarah and Polly are.  After several chapters, we finally get an idea that Sarah is older – perhaps even close to twenty – while Polly is still fairly young, probably 10-12.  But it was a bit difficult to really get into the story and understand the perspectives with absolutely no concept of their ages.

The language was a bit crude.  Not overwhelming swearing or anything like that; it was just as though the author felt the need to constantly remind us that life is real under the stairs.  We don’t sugarcoat stuff.  So we have to use words (in both conversations and narrative) like piss and shit, e.g. “She slipped in some hog shit,” or “the baby smelled of milk and piss.”  It just got old after a while.  Apparently urine and manure can only be referred to as piss and shit, and apparently we have to talk about them ALL THE TIME.  Like this:

He wandered around a while, looking for, and failing to find, the necessary house: Polly passed by some minutes later, with a basket of peas from the kitchen garden, and saw him pissing in the shrubbery.

That sentence has NOTHING to do with anything.  It literally feels like she just wrote that sentence so she could work “pissing” into the narrative yet again.

It also felt like the author had gotten a list of modern necessities for writing a historical novel in 2013.

In the witching hour of a winter night, she brought forth a tiny scrap of a boy, who opened blue-black eyes and studied her with a sleepy wisdom, and whose suckling was a dragging ache in her breast, and whose tiny ruddy fists kneaded at her as though he was quite deliberately reshaping her and making her into someone altogether new.  What had hitherto seemed a problem to be solved was not revealed to be the answer: the very fact of the child made everything that had gone before shift and ripple and settle differently, because it all now led to this, and him.  And he was a perfect as a syllabub, or a pillowslip straight off the line.

I really love that paragraph.

I could go on, but the point is, there was way too much 21st century mixed up in this tale to make it truly enjoyable for me.  Add to that the fact that she has Sarah go with Elizabeth to Pemberly after Elizabeth’s marriage, and then goes out of her way to make it appear as though all is not well there – that Elizabeth is distressed and homesick and that Darcy is as grumpy and un-lover-like as ever.  Then Sarah leaves Pemberly to go find her true love who’s ignored her for over a year, and we never hear anything more about the Darcys (because the story isn’t about them), and really, would it have been so difficult to make so that Darcy and Elizabeth were having a happy marriage instead of deliberately making it sound as though things were depressing?

And really, that was the problem with the whole book.  It was plain depressing.  Everyone’s story was sad.  No one was happy.  No one was happy, or had any prospect of happiness.  Perhaps Sarah and her man, but at the same time – I just wasn’t feeling it.  He was dishonest with her, lied about his past, than ran away from it, and never bothered to check after her or let her know that he was alive or where he had gone – is that really a man who is going to make a good husband??  The book was choppy, with lots of flashbacks and back stories.  It was always in third person, but jumped a lot to tell the thoughts of various characters, making it difficult to know who the story was really about – Mrs. Hill?  Sarah?  Polly?  James?  It ended up being about all of them, and so it was a bit overwhelming and not as interesting.

That, combined with the rough language and casual references to sex (because we’re REAL below-stairs!) left me with no warm feelings towards this story.  The whole book felt like Baker was trying far too hard to shove the differences between the above-and-below stairs lives into my face, with the conclusion being that everyone is miserable, and that doesn’t really lend itself to relaxing reading.  1/5.