by Stephanie Calmenson and Joanna Cole

Published 2013 – This is an Advanced Reader’s Copy provided in exchange for an honest review, etc etc

So this is another book for younger readers, an early-reader chapter book about two best friends who LOVE DOGS but can’t own one because of their apartment restrictions.  When they find a pair of matching necklaces at a thrift store, they discover that the necklaces can turn them into dogs!  And adventures ensue.

This was a fairly simple book, but I think that it did a fine job of not falling into too many stereotypes – the girls are neither obsessed with girlishness or insistent on proving they are “as good as” the boys.  The boys in the story are not mean or bullies, but just boys.  While their moms are both single moms, we manage to get past that with just a couple of sentences:  “Their moms were best friends just like they were … They were single parents and helped each other out a lot.”

While the girls start out by using their dog-power to tease the boys, in the end they all become friends and work together for the common good – writing a new jingle for the Adopt-a-Dog Week at the local shelter.

Fairly inane, but a book I won’t be embarrassed to hand over to my little sister.  3/5. 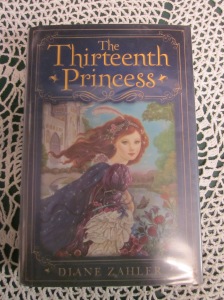 I love fairy tale retellings.  Even when I know, deep down, that they’re going to be terrible, I still can’t resist them.  It’s like eating that last cookie that you know is going to make you feel sick but they are THE BEST COOKIES EVER so how can you resist?  This was one of those books.  My rarely-wrong sixth-sense that tells me whether or not a book is going to be dreadful was urging me to RUN, but I have really enjoyed the sudden spurt of retellings of the Twelve Dancing Princesses, and how could I really resist?

First off, let me clarify that this is a book for younger readers (I think it’s officially in the 9-12 range; the young heroine was 12.  However, while the writing was definitely manageable for a reader at that level, I don’t think that I would recommend the story for those who are younger – Zita seems overly interested in kissing and what it is like to by physically close to boys (and specifically one boy in the story), and I really don’t appreciate stories that encourage that kind of thing in such young girls.

(And yes, I know that back in the day everyone got married when they were 13 etc etc etc BUT this is a FAIRY TALE, not a historically accurate novel.  If it was historically accurate, well NONE OF THIS WOULD HAVE HAPPENED, much less letting a princess’s love interest be a stable hand.  Point being, if you’re writing books for pre-teens, I don’t think that you should be reassuring them that going about kissing boys is what they should be doing.  This book would have worked even better if either Zita had been a bit older or the whole kissing/having the maids say that it’s important to know “when to stop” had just simply not been in the story AT ALL.)

Anyway, the basic premise of the story is that the king got married and had a wife he really loved except she kept having daughters and she had twelve daughters and it really soured their whole marriage and things got really weird and the king went kind of insane except no one seemed bothered by his actions even though they were pretty cruel and irrational and basically the book doesn’t straight-up say it because it’s for preteens but you are definitely given the impression that he got drunk and more or less raped his wife after they were visited by some neighboring king who had sons because our king was reminded of how upset he was about not having a son (even though the story goes out of the way to say that the oldest daughter is going to inherit the throne and that her father would never dream of letting the throne pass on to someone else so…  what’s the big deal about the son then?  Just one of the many things that didn’t hang together)….  um where was I?  Oh yes, he impregnates his poor, exhausted, abused, mistreated, misaligned wife yet again and then has the nerve to get super upset when she has another daughter.  First off, who the heck’s fault is it when someone has a girl instead of a boy?  (The male, actually…  he’s the one who contributes that particular gene…)  And secondly, not like you have a super awesome track record here:  You already have TWELVE DAUGHTERS.

So the king goes into this fit of rage (and the queen dies from childbirth complications and is probably glad for the escape from someone who apparently only loved her as a potential son-bearer) and decides that this youngest daughter is going to be brought up as a servant.

So yes, Zita is raised in the kitchens except it’s no secret that she’s a princess, so the whole thing is stupid, because the cook doesn’t want her hanging out with a stable boy because she’s a princess, but she’s expected to help cook everyone’s food?  At first, she’s not allowed to see her sisters, but then when she finds out that she’s a princess, her sisters are all super excited and she starts sneaking out to see them?  The whole thing was just dumb.  It was a concept that could have worked, but it just felt like the author was too lazy to pull things together, almost like she purposely wrote a preteen book, hoping that 10-year-olds wouldn’t be able to see through all her plot holes.  (And I don’t expect tons of explanation and details about the government or whatever, but a story, no matter how simple or involved, should at least MAKE SENSE.)

The the author tried to make the rest of the sisters a little more relatable (apparently that isn’t a word?  Well it should be) by giving them all names and trying to give them little quirks and whatnot, except all of their names started with an A (in an attempt to make Zita’s name more emphatically different), so it just got super confusing.

And I’m really not even going to touch on the actually story of the Twelve Dancing Princesses, the part where they actually start dancing.  Suffice to say that it made just as little sense as the rest of the book.  The villain came out of absolutely no where, no warning, no hints, and actually absolutely no point.  Even after I found out who it was, I was just confused.  She tried to explain, but was really unable to come up with any plausible reason as to why this particular person should have been the villain.

Whatever.  The whole book was pretty dreadful.  I just get super frustrated when someone has an intriguing idea and then are too (I don’t know what… lazy?  Illogical?  Apathetic?) to make it work.