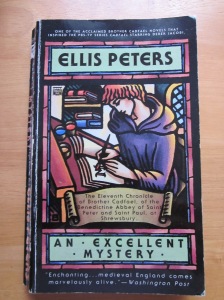 This is actually one of my favorite Cadfael books, and I’m not sure that I can exactly describe why.  I won’t try to describe the entire story, but towards the beginning of the book, a monk, Brother Humilis, comes to stay at the Abbey of Saint Peter and Saint Paul.  While not an old man, he fought in the Crusades and was terribly injured there.  And though he was somewhat recovered, he is still dying, slowly.  Traveling with him is another brother, Brother Fidelis.  Though mute, Fidelis shows his devotion to Humilis through his constant, tender service.

There is just something so very beautiful about this friendship, about the care that Fidelis gives, and the gracious and humble way in which Humilis receives it.  This man who was once a great and famous soldier, now reduced to a shadow of his former self, who laid aside even his name (for Humilis was not his name in the world) and accepted the burdens he was given–this man is a profound example of one who is willing to receive, even with thankfulness and praise, God’s will.  And Fidelis–simple, quiet, constant service, the every-day laying aside of himself to give to one he loves.

The other stories that are woven throughout this book are thoughtful as well, exploring love and loss and lust and courage and sacrifice and forgiveness.  I have a bit more to say about this, but cannot do so without spoilers, so the rest will be below the line.  :-)

We find, during the story, that Godfrid Marescot (who later becomes Humilis) had not thought to ever marry, for he was a younger brother and had no need to produce an heir.  But just before he left for battle, his brother died.  And so Marescot was pledged to marry a girl on his return.  As that would not be for several years, a decade even, perhaps, he chose a girl who was only around ten at the time, a common enough practice in 1141 England.

And so, Marescot goes to battle, and is wounded there–while Peters isn’t explicit, it’s implied that the injury was to his groin area, leaving him unable to produce children.  Because of this, Marescot releases his affianced bride, whom he has not seen since she was a child, from her betrothal, and enters the monastery, becoming the quiet Brother Humilis.  Through the twists and turns of the story, we discover that the bride, thought to have traveled safely to take her vows and become a nun, actually never arrived at her abbey, and thus has been missing for three years.  By the end of the story, we have learned that Brother Fidelus is actually that bride, who grew up knowing of and admiring and future husband, full of reverent hero-worship.  Despite the differences in their ages, she yearned to be a good wife to him.  And so, she disguised herself as a young man (with the help of an old and trusted servant, who was supposed to be escorting her to the abbey) and became Brother Fidelis, willingly taking on years of silence and disguise in order to serve the man she considered  her husband.

The very end of the book quotes from the Scripture, when Saint Paul reminds us that the marriage of a man and a woman is ‘an excellent mystery,’ and suddenly the title of this book, which initially seems like a bit of a cop-out (calling a mystery an excellent mystery?  Really?) becomes beautiful and poignant.

This entire book is just so deep and rich in its exploration of humanity, frailty, failure, triumph, and love–it’s incredibly beautiful.  I cannot recommend these books highly enough.