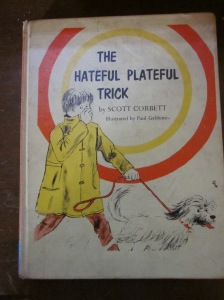 Per usual, Kirby & Co. are finding ways to get into trouble, starting with a very rainy day.  Kirby and Fenton can’t play baseball, can’t hang out in their club house (it leaks), and can’t think of anything they want to do.  And to make matters worse, they have to babysit Kirby’s little cousin, Gay!  When an experiment with their magic (?) chemistry set goes wrong, all three end up smelling like their least-favorite meal, and only Mrs. Graymalkin can save the day.

I’ve really been enjoying these little books–only two left!  They have the happy innocence that so much of today’s children’s literature lacks.  4/5.

So, here we are with another Cadfael book.  And while, as always, I enjoyed the story, this particular book is not one of my favorite mysteries.  For me, the conclusion is not far-fetched exactly, but a bit out of the circle of the thoughts Peters has given us.  It’s kind of along the lines of just choosing some random person off the street to be the murderer, instead of one of the people the detective has been interviewing.  Possible?  Yes.  Almost like cheating when you’re writing a mystery novel?  Perhaps.

Still, the story is interesting and well-written, and the relationship between Meriet and his father is well-drawn, I think.  What does one do with a younger son in 1140 England?

These books are all excellent reads, and I can’t recommend them highly enough.  But because I felt like the mystery itself was a bit weak in this one, it’s a 4/5.

Do you ever read a book that you can’t decide whether or not you like?  Well, this was one of those for me.

In 1945, Lovelace published a new Betsy story.  For the first four books, Betsy’s stories were illustrated by Lois Lenski, who captured the innocence and delight of these tales perfectly.  But when Betsy entered high school in Heaven to Betsy, the story was illustrated by Vera Neville (who continued to illustrate the rest of the series).  And somehow, that emphasizes the evolution of Betsy from a little girl to a young adult.  Lenski’s illustrations were round and childish, while Neville’s are sophisticated somehow.

These books continue to delight me.  The next four books each cover one year of high school, and watching Betsy grow and mature is wonderful.  Despite the old-fashioned background (Betsy graduates with the class of 1910), Betsy’s struggles and life-lessons are surprisingly relevant, as Betsy learns to balance her life, to be true to herself, and that happiness is found through selflessness.

There is a perfect passage in Betsy in Spite of Herself.  Throughout the book, Betsy has tried to take on a new persona, and has, to some degree, succeeded, and the handsomest boy in her class has been her steady beau for several months.  When things end with him, Betsy goes for a walk and does some soul-searching.

“It couldn’t have lasted.”  [she said to herself] “It wasn’t true from the beginning.  It wasn’t the real me that [he] liked.  No particular compliment in having him crazy about somebody who wasn’t even me.”

Originally, I fell in love with these books because of their whimsical sweetness, but as Betsy grows to adulthood, I am loving them for the insight that Lovelace slowly grants to Betsy.  These are wonderful, wonderful books.  I wish that I had read them years ago.

Kirby and Fenton are stuck spending their Halloween with Kirby’s little cousin Gay.  The worst part?  Gay has discovered Kirby’s secret chemistry set, and insists that the boys give her a demonstration.  In this perfect Halloween story, the boys are stuck with a beard and a mustache that have to be scared off before their parents come home and discover all!

Another hilarious collection of short stories involving that famous and intrepid duo, Bertie and Jeeves.

One of the things that I greatly enjoy about the Cadfael books is Peters’s meticulous historical research.  She manages to weave history into these stories as naturally and seamlessly as breathing, giving them depth and background.  In this book, she explores the custom of sanctuary–that a man pursued, accused of a crime, may throw himself upon the altar and be granted a 30-day grace, as long as he stays confined to the pale.

While this story is as excellent as the others, I must take a moment to grant myself a caveat–while I love these books, I do not 100% agree with Peters’s morals (via the wisdom of Cadfael).  In this book, her/Cadfael’s views on extra-marital sex do not agree with mine; I do not believe that God is so cavalier towards these relations as Cadfael would have us believe; no where in Scripture do I find written that, so long as two people love each other, it’s okay to have sex outside of marriage.

But I believe that everyone will find something with which to disagree in every book, and so am willing to overlook and not particularly fuss about this attitude that goes against my personal beliefs.  I only bring it up here because it is actually a decent part of this particular story.

In this installment, Kirby and Fenton run into great difficulties when Waldo, Kirby’s dog, manages to crash into his arch-enemy (Xerxes, the next-door cat), and the two switch personalities.  These books are written to younger readers, but are still a creative and fun, if simple, read.

Betsy and  her friends are growing up!  In this book, the last before the girls enter high school in Betsy in Spite of Herself, Betsy, Tacy, and Tib find themselves entangled in many adventures, especially now that they are old enough to go to town by themselves.  Times are change in Deep Valley–there is a new-fangled horseless carriage, a theater, and a beautiful new hotel.

Lovelace describes the changes to the small town beautifully, probably because these books are very closely autobiographical.  I am growing more and more fond of Betsy and her friends, and cannot believe that I have only just discovered these perfect stories.

Isn’t this the creepiest cover art ever?!  I don’t know who designed these.  The actual editions of the books are delightful–perfectly bound and just the right size–but the covers!  Dreadful!

Luckily, the content is just as delightful as ever.  I do love Bertie and Jeeves; however, I am more fond of the full-length novels involving this pair than I am these collections of short stories.  This book is worth picking up, though, if for no other reason than the last story, told from the first-person view of, not Bertie (as usual) but Jeeves himself.  Perfect!