Home » Book Review » One Corpse Too Many 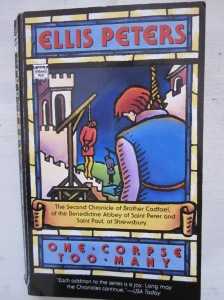 This is the second of the Brother Cadfael books.  As I said, this is a series that deserves to be read from beginning to end.  In this book, we are introduced to other new and important recurring characters.  Although part of the fun of this book is trying to determine which of the characters that will be, so I will try to not tell you his name!

As a rule, my husband doesn’t even try to keep up with my reading material, but he did question why I was reading a book with such a picture on the cover!  :-D  But, as I said in the review of A Morbid Taste for Bones, these stories are set during a civil war in England around 1140 (I think this book takes place in 1138).  In this story, King Stephen’s forces overrun Shrewsbury, which had been in the territory of the Empress Maud.  All of the garrison are unceremoniously hung (hence the cover picture).  The monks are given permission to care for the bodies, making them ready for burial, and allowing the people of the town an opportunity to collect their dead.  But in the midst of this rather gruesome, but necessary, task, Brother Cadfael discovers that there is one more body than there ought to be–a murderer has taken advantage of the fact that over 90 men were hung and thrown into one terrible pile, and added his own victim to them.

I so admire Cafael’s shrewd wisdom, and the battle of wits between himself and a younger foe makes for fantastic reading.

One thought on “One Corpse Too Many”