Home » Book Review » The Case of the Fugitive Firebug 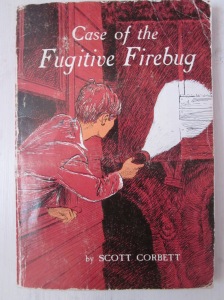 The Case of the Fugitive Firebug is actually the second book in a series, but I do not own the first, The Case of the Gone Goose, (and neither does the library).  Still, while there is some continuity between the books of this series, it is rather simple children’s fiction, a step up from Encyclopedia Brown, and it is not too difficult to pick up the story starting here, in the second volume.

Roger Tearle, more commonly known as The Inspector, is a 12-year-old detective, who, with the assistance of his twin sister, Shirley, and best friend, Thumbs, finds himself entangled with mysterious goings-on in the neighborhood.  In this book, Roger becomes the unwilling protector of an accused firebug.  The Inspector doesn’t even like Hazy Milford, but is still convinced of Hazy’s innocence, and determined to find the true culprit of the garage fire Hazy supposedly set.

While the story is not ridiculously dramatic, it is still well-told.  Roger, Shirley, and Thumbs are all fun (if not terribly in-depth) characters, and Roger’s exasperation with Hazy is well-written.  Roger manages to come off as intelligent but not a know-it-all (again, think Encyclopedia Brown).  I love the books from this era, because the children are just that–children–and treat their elders with respect, even when the elders are in the wrong.