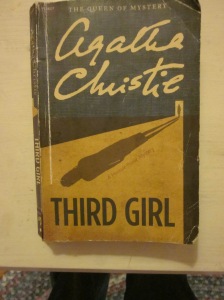 Mrs. Oliver and Hercule Poirot team up again in Third Girl.  Poirot is approached by a young woman who thinks she “may have murdered someone.”  She then leaves his flat and disappears.

The story is a bit unusual in that it does not center around a murder–Poirot spends a great deal of the  book trying to find a death, any death, to understand the girl’s enigmatic statement.

I was personally not a huge fan of Third Girl, as I didn’t really like any of the characters, and thus was ambivalent towards the identification of the murderer.  The lack of a victim made the story feel rather aimless at times.  And there was a great deal of complaining about “modern” young people to the point that it felt almost as though Christie had written the book just so she could complain about the way young people dressed, lived, and smelled.

A 3/5 for a meh kind of book from an author who has definitely done much better.