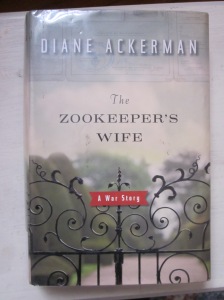 This is actually a nonfiction account of a young Polish couple who helped protect, smuggle, and house Jews in Warsaw during World War II.  Prior to the war, they owned and operated Warsaw’s zoo (hence the title) and throughout the war still worked with animals for different reasons, giving the flexibility and cover stories that were useful to their cause.

The story is an interesting one, but Ackerman’s writing style is rather bland for me.  Instead of telling the story in a linear fashion, she just sort of recounts various vignettes. Despite the fact that these people lived intense, focused, dangerous lives, Ackerman’s book never once made my pulse race.  There was none of the connection to people and their lives as in, say, Corrie ten Boom’s The Hiding Place.

And I think that she was writing this as non-fiction, and she wanted to be very true to the people and accurate with their story, which is why there isn’t a lot of dialogue or “and then she thought” or anything like that, and that’s fine.  While it made for an interesting one-time read, it possessed none of the drama and real-life-ness needed to make it a book I would want to add to my personal collection.