Okay, so, confession: I’m in love with a Polish man in his 90’s.  Seriously.  I love Richard Pipes.  I can’t explain why.  But his books are just fantastic to me.  They are so very readable and insightful.  (I reviewed Russia Under the Bolshevik Regime on my tumblr blog a while back if you’re interested.)

This was actually a slender, easy read, looking at the basics of Communist history, governments that have attempted (or claimed to attempt) Communism, and the influences of Communism on modern culture.  As always, Pipes is brilliantly insightful, logical, and clearly-spoken.  I strongly recommend reading his books if you are studying Communism or Russia. 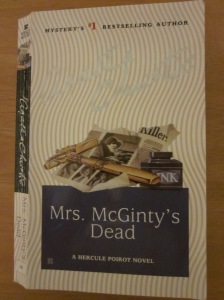 I have to admit, the later Poirot novels are not my favorites of Christie’s work.  The last several that I’ve read are just not at the same level as the earlier works.  In this particular book, an old woman is murdered.  All evidence points to a young man who was boarding in her home, and he is duly arrested.  However, the police superintendent in charge of the case has a niggling doubt that he cannot explain or justify, and so he comes to Poirot and asks him to investigate.

Secondly, the plot gets quite convoluted (in my mind).  A newspaper article has been published, talking about four women who were involved in murders back in the day, a sort of retro “where are they now,” and Poirot believes that somewhere Mrs. McGinty (who was a cleaning woman) saw the original photograph, and that was why she was murdered.  So now there are four possible women involved, but he doesn’t know which one, and it could not only be one of the woman, it could be someone related to one of the women, or someone related to one of the women’s victims, and, I don’t know, it’s just all very vague and haphazard in my mind: somehow, the whole story is just a bit too coincidental.

The only bright part in this book is the appearance of Ariadne Oliver, whom I love.  Loosely based on Christie herself, Ariadne is an absent-minded writer of mystery novels who happened to write a mystery with a Finnish detective.  Her book was wildly popular, and so she has to keep writing about him, even though she knows nothing about Finns.  Her tongue-in-cheek references to Christie’s own difficulties with writing are always delightful.  She’s one of my very favorite fictional characters of all time, and I am super happy whenever she appears.

Overall, this was a 3/5.  Too many gaps in the plot for me, but some of the characters are just great fun, and Poirot’s complaints of his dreadful boarding house are also delightful.