So, this is the first book in the Prydain chronicles, and I had forgotten how much I love them until I started reading them again.  These books are delightful in every way.  The Book of Three is fairly light-hearted.  It introduces all of the main characters, bringing them together has they travel through Prydain.  The main character is Taran, Assistant Pig-Keeper of Caer Dallben.  When the pig in his charge, Hen Wen, runs away, Taran is caught up in an adventure.

While this book feels like a bit of an introduction (and it is), it is still delightful in its own right.  I highly, highly recommend this entire series.  5/5.

And here we have it, the fourth and final installment of the Tiger series!

The series did have a fairly satisfying ending.  This book also involved a phoenix, which is my favorite mythological creature.

WHICH REMINDS ME.  Somehow, when I was reviewing Tiger’s Quest, I forgot one thing I was going to mention, and that was the fact that one of the things I did not particularly like about this series was the way that it haphazardly mixed religion and myth, as though they are both equally unbelievable.  I really know nothing of the Hindu religion, but I do not think that if I was a Hindu that I would take kindly to a series of books that basically, by its very premise says, “Your religion is a fairy tale.”  In Tiger’s Quest, Kelsey and Kishan find Noah’s Ark, and it’s the same kind of attitude from the author–we can include this in my fairy tale book, because it’s the stuff of fairy tales.  And I find that offensive.  Not in a I AM GOING TO WRITE TO THIS WOMAN AND GIVE HER A PIECE OF MY MIND kind of way, but just…  really?  I don’t appreciate the mockery of religion.  Like I said, I know nothing of the Hindus, so I have no idea if they would find Houck’s take on their religion offensive or not.  So.  End rant.

Still, this book, and the series overall, ranks a 3/5 for me.  I may read it again someday, but it’s not really a set of books I expect to return to again and again.

END_OF_DOCUMENT_TOKEN_TO_BE_REPLACED 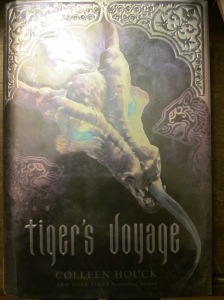 In this third installment of Houck’s Tiger series, we pick up directly following the close of Tiger’s Quest.  Throughout the story, Kelsey, Ren, and Kishan must now work together to travel on a journey meeting with several magical dragons who give them items that the trio need to complete their overall quest.  Once again, the writing was good and the story intriguing, but there was just toooooo  much Kelsey/love triangle drama for my taste.  Overall, a 3/5, because the dragons were awesome.  See below for spoiler-filled ranting if you are interested.  :-D

END_OF_DOCUMENT_TOKEN_TO_BE_REPLACED 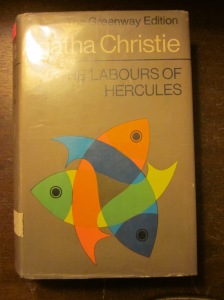 As a side note, the list of Poirot titles that I have has let me down the last couple of books by not having them in accurate published order, which is a tad annoying.  Ah well.

This book is comprised of twelve short stories, tied together with a common theme.  In the introduction, Poirot is talking with someone, who comments on the irony of Poirot’s first name (Hercule).  Poirot responds that he does not know what possessed his mother to name him after Hercules, but he thinks that they are not unalike, for while Hercules performed tasks requiring superhuman strength, he, Poirot, performs tasks that require superhuman mental strength.  After his guest departs, Poirot researches the life of the mythological Hercules, and decides that he, Poirot, will undertake to solve twelve mysteries that follow the same lines as Hercules’s Labors.

Usually, I am not a huge fan of Christie’s short stories, but these were actually a lot of fun, with a bit of snarky humor thrown in.  I think that the reason that they were enjoyable was because they were not super-involved mysteries crammed into a chapter, but mysteries that made sense to solve in a chapter.  It was also fun to see how Poirot followed the twelve Labors.

So, I reviewed the first half of this series earlier, and have been plugging along through them ever since.

I wanted to like these books.  I really did.  The writing was great fun and the similes amazing.  But…  just…  it was irritating.  I spend thirteen books following these kids around, reading about all the just stupidly frustrating and depressing things going on in their lives, and in the end…  I get nothing.  No resolution.  No answers.  No explanations.  Absolutely nothing.

This series, overall, was 2/5.  I’m glad I read it, but I will never bother reading them again.

This is the second book in Houck’s Tiger series, which started with Tiger’s Curse.  This book got an overall high 3/5 for me.  For more review and some VERY STRONG OPINIONS on love triangles, check out the spoilers below.  :-D

END_OF_DOCUMENT_TOKEN_TO_BE_REPLACED

So, I must have accidentally deleted the picture of this book before uploading it.  Sorry about that.  Anyway.

This Poirot mystery was not particularly one of my favorites.  It seemed a bit disjointed.  However, I have to admit that Lady Angkatell was delightful.  Overall, I think that the reason that I didn’t really like this book was that it was sad.  And there really wasn’t much of a happy ending.  Also it really bothered me that John was having an affair with Henrietta, and yet John’s wife completely trusted and admired Henrietta.  Basically, I despised John as weak and selfish, and couldn’t really respect Henrietta, who managed to find justification for her affair by believing that John’s wife wasn’t really what John needed.

This was a low 3/5 for me.  Definitely not a favorite Poirot.